All Souls, All Saints

I have watched the growth of what I believed was the American import of Hallowe'en with cynicism, thinking, like Father's Day, it was created to give the retail trade another spurious event to promote. However, a tiny bit of research reveals the tradition evolved from an ancient Celtic festival called Samhain - a Gaelic word meaning 'end of the summer' - which is believed to have been a celebration of the end of the harvest and a time of preparation for the coming winter. 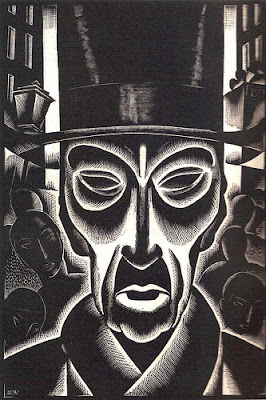 (Image courtsey of A Journey Around My Skull, by John Buckland Wright's illustrations for Poe's The Masque of the Red Death and Other Tales)

All Saints, to you who were not raised Catholics, originated with Pope Boniface IV, who instigated the idea in the early 7th century when he consecrated the Pantheon in Rome as a church dedicated to Saint Mary and the Martyrs, and ordered that that date, May 13, should be celebrated every year. Several centuries later, Pope Urban IV (d. 1264), ordered it to be a day specially to honour those saints who didn't have a festival day of their own.

How All Saints ended up being celebrated on 1st November, I have no idea.

All this is by way of an excuse to talk of books that go bump in the night. It was prompted by this article in The Paris Review which mentioned a book I have referred to in an earlier post, We Have Always Lived in the Castle by Shirley Jackson.

The mistake I made is I don't really do anything that goes bump in the night - books, films or theatre. I find life too frightening already, what with daughters and granddaughters, to further scare myself on a voluntary basis. What is really scary Is I will be facing them all for a belated birthday dinner in honour of Rebecca at my ex's on Hallowe'en. The littl'uns will be trick and treating. I won't.

I will be in bed early with the duvet over my head.

This may explain my horror of horror. One of the many houses we lived in when I was a child in Malaya was a pre-war, single story house, built of wood then grey with age, and raised on stilts. You walked up the stairs, through the door into the main reception room, with bedrooms and what have you in the eaves on either side. Steps at the back led down to the box room and out to the servants' quarters. (We kids, Ukow, Onyow and I - and apologies to any Chinese speaker for my useless phonetic spelling - found a cobra's nest complete with eggs in one of the boxes out back. That was fun. I also discovered a hornet's nest under the building. More fun.)

To get to the story:

The house stood alone, away from other habitation, and when we first moved in my parents discovered a sign in the overgrown garden that they presumed was in Chinese. They thought no more about it.

Now, given the humidity, my parents slept in separate beds. One night they were woken by the most horrific screams seemingly coming from between the two beds. My father, who was raised in Burma and so well-used to the noises of the jungle at night, was still shaken enough to leap out of bed, grab his revolver and turn on the light. All they could see were some ugly stains on the wooden wall high up between the beds. It was, as you can imagine, very disturbing. Especially as the event happened on more than one occasion. They could think of no natural source or explanation for the tortured noises.

However, matters were to turn more sinister.

They invited a professor they knew to dinner one evening during the course of which they showed him the sign, curious as to what it meant.

'It is not in Chinese,' he said, 'but Japanese. This building was once an interrogation centre during the war.'

Yes, scary enough. If there's enough pain, it can be felt at a distance - happiness too.

Hallowe'en is, I believe, for people who lead dull lives, hence its popularity in the US and Canada.

Ever played with a Ouija board?

The Ouija board is the work of the Devil! But I did once, and for a whole night invented a wonderful story about a Welsh concubine of a Roman legionaire - a story my friends believe genuine to this day.

By the way, while driving along the front in Brighton with Sue, she saw a couple of crows mug a pigeon causing it to be run over. Sue said it looked almost deliberate.

As we moved on, the crows took up position on an overhead line, presumably waiting for a break in the traffic to get to the carrion.

Ever heard of anything similar? Or was it pure coincidence?

All that staining in your house in Malaya sounded almost benign alongside the knowledge of a cobra's nest being under the same roof. Now that's what I call really scary.

But just as scary are gatherings of large numbers of people where you have to engage with them otherwise one is considered to be grump. Hurumph!

Now I too am off in search of the duvet in readiness for the witching hour.

The hornets were more frightening. Snakes were two a penny.

Granny Paula told me that story, when i was at very influential age. It has scar'd me for life. I can not do horror films or ghost storys now and am now known as a rude term for a cat. or it may be Mum's fault for being nerotic. xx p.s ignore spelling mistakes pls save the letuce (did that 1 on purpose. lol)x

Granny Paula, or Mum as I knew her, never liked you. She made the whole story up just to scar you for life. God, she was wonderful :)xx

U know i really dont understand why i turned out so normal with u as parents!!!!

I don't understand it either anon. Who needs the Witching Hour with a father like that. Reeeeeeally scary...

About Me All Is Chaos

DOT
Brighton, United Kingdom
I write. I read. I write some more but never enough.

Subscribe Or Be Cursed For Never Knowing What You Are Missing

Blogs For BookWorms To Burrow

In Memory of Lisa Ratcliffe

Warning. This Can Seriously Damage Your Day

My Attempt for World Measles.